Nokia N1 comes with a vibrant 7.90 inch IPS LCD capacitive touchscreen display with 2048×1536 resolution with 32GB internal storage and a 2 GB RAM. It is powered by 64-bit Intel Atom z3580 Quad core at 2.3 GHz and a compromising PowerVR G6430 GPU. Nokia N1 is 6.9 mm thin and comes with corning gorilla glass 3 that makes display clean and appealing to touch and moreover it is the most advanced protection technology used in mobile screen glass manufacturing. Another most interesting feature of Nokia N1 is that it comes with Z launcher that allows searching app much easier. Just Scribble the starting letter of your favorite app and the z launcher will show up all apps related  to the scribbled letter. Wi-Fi 802.11 a/b/g/n/ac, dual-band, Wi-Fi Direct, DLNA, hotspot, microUSB v2.0, Type-C reversible connector , Non-removable Li-Ion 5300 mAh battery (18.5 Wh) are some add ons on this device. 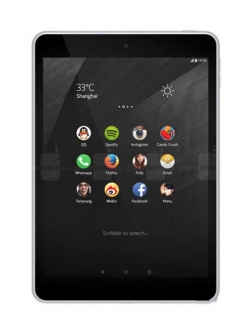 No Offers this time .. Check back later